"Meen is a Lebanese rock band with a twist.

The band was founded by Fouad and Toni Yammine, the warped minds behind the quirky lyrics and catchy melodies.

They hold the noble mission of promoting Lebanese rock music as their main objective, followed by other worthy goals such as getting rich and impressing lots of chicks."

This band has gained so much popularity in Lebanon and the Middle East and has always been great fun to play in. So far they have recorded three albums together and perform regulary around Lebanon. 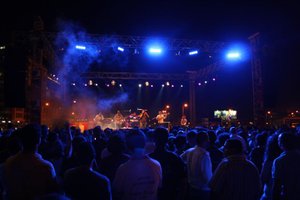